July 28, 2019
The new semester has just begun, but some children can no longer return to school.

On August 17th, the three-year-old boy who lived in Beijing Exhibition Road fell from the window of the 5th floor and was seriously injured because the windy bedroom door was locked and the old man at home was out of the key.

On August 31 and September 1, two consecutive cases of falling of primary and middle school students in Hefei occurred.

At 3:30 pm on September 4, Fengtai District saw the No. 12 Building, Xinli Street, on the east side of Danqiao. The girl fell from the 22nd floor and landed on the platform between the two floors. Unfortunately, she died.

In the early morning of September 5, a 6-year-old boy from a residential quarter in Chenzhou City, Guangxi, fell from a five-storey residential building and died after being rescued.

Such frequent incidents of falling children have caused many parents to fear their own windows. So, is this concern more intense for communities like Wangjing, which is a high-rise residential building? For this reason, the reporter conducted an investigation.

The reporters went into 45 communities, including Xijing West Park and Huajiadi Beili, and interviewed parents with children.

Among the 180 people interviewed by the reporter, 45 said, â€œBecause the floor is low (under 2 floors), there is no concern about children falling down.â€ 31 people said, â€œThe fence or safety lock is installed in the home, so it is not "I am particularly worried," 47 people said. "There are still concerns about safety issues despite the installation of fences or security locks at home." 57 people said, "There is a lot of concern or concern, so it is rare to open windows."

The reporter found that for the children falling from the building caused by the opening of the window, all the residents of Wangjing who expressed concern were able to tell some recent events.

Among the 180 respondents, the number of residents who realized that the window would pose a safety hazard to children was more than half of the total respondents, accounting for 58%.

The safety hazard of the fence still exists

So, at present, many home-installed protective fences can completely avoid risks? During the investigation, the reporter found that residents in Wangjing area often installed two kinds of safety fences: one is a flat window type fence, this kind of protection The fence can provide a strong security protection, which can effectively prevent thieves and children from sticking out through the window, but this kind of fence greatly affects the aesthetics and the comfort of the residents.

The other is the fluttering fence, which does have a good anti-theft effect, but it does not have much effect on protecting children. Because according to children's psychologists, children within 10 years of age are curious and not afraid of high. The child will automatically enter the fence for fun because of the fun mentality, but the large gap in the fence brings more hidden dangers to the safety of the child, which is known as the â€œsupporting brotherâ€. Moreover, the fence is easy to rust after being blown by the sun, and the strength is reduced due to aging, and it is very dangerous for the child to enter the play. In this regard, the best way for children's experts to prevent children from accidentally falling down is to not give children the chance to climb out the window.

In addition, whether it is a flat window type fence or an external floating fence, it greatly affects people's living comfort, and most importantly, it hinders the passage of people's escape in the event of a fire or other accident. So, is there any way to prevent theft and protect children when the residents open the windows to ventilate without installing protective fences?

The reporter found that a variety of security locks installed on the windows are available on the market. These safety locks can not only prevent theft and protect children when the windows are ventilated, but also make no obvious modifications to the windows, ensuring that we are in an accident. When you can escape smoothly. So, what is the quality of this type of security lock? Can it really do the above?

Since this kind of safety lock is mainly for push-pull windows, the reporter deliberately investigated the types of windows installed in the homes of the Wangjing area.

This kind of safety lock is made of metal material and uses the friction generated between the window frame and the safety lock to fix the opening limit of the window, thus providing safety protection. However, during the experiment, the reporter pushed and pulled another window that was not fixed by the safety lock. As a result, the safety lock showed obvious looseness.

Advantages: The hardware safety lock itself is of high quality and can protect children.

Disadvantages: The anti-theft ability is weak; it needs to be fixed on the window frame, and it is impossible to open the screen window while opening the window; the safety lock needs to be tightened with a key, and the operation is complicated.

As the name suggests, this type of security lock is attached to one of the windows by the suction of the suction cup to control the opening limit of the other window.

Due to the limitations of the suction cup itself, the suction safety lock did not take off from the glass for a long time during the experiment.

Advantages: no traces of use on windows and glass; windows that require burglary can be replaced at any time.

Disadvantages: Theft and protection of children is weak and almost ineffective.

The butterfly-type safety lock is fixed to the glass of the window by the adhesiveness of the double-sided tape. Two pieces of plastic like "butterfly wings" are used to block the opening of the window and control the opening degree of the window. The "wings" adopt a hinge design, which is easy to operate.

When the reporter opened the window, the butterfly-type safety lock slightly deformed and cracked.

Advantages: The shape is designed to be "butterfly" shape, which is very beautiful; it has certain safety protection ability.

Disadvantages: The operation is too simple, easy to be learned by children, thus losing the role of protecting children; double-sided adhesive and "wings" are not strong, and the protection is low.

Advantages: installation and use of "zero" difficulty; beautiful, firm, anti-theft and protect children's effect; keyless design, easy to operate indoors, use power as a mechanism, although the operation is simple, children can not open; does not affect the use of screens .

Disadvantages: It is highly targeted and can only be used for horizontal sliding sliding windows or doors, and the gap between glass and another window frame should be greater than 1 cm.

It is not difficult to see through the above experiments that only the fourth U-shaped security lock can protect children and property. Therefore, the reporter once again investigated this type of security lock and interviewed the inventor of the security lock - Hong Mr.

The U-shaped security lock is named MacDaddy Security Lock. According to Mr. Hong, "The biggest feature of this kind of lock is that it can protect the safety of children and property under the premise that the window is open and ventilated." For the double-sided adhesive behind the safety lock, 3M special glue is used, and the lateral force reaches 500. More than one kilogram can effectively protect the window when it is ventilated. In addition, â€œThe product has also deliberately designed three modes, namely children mode, safety mode and open mode.â€ The maximum opening limit of the window in children mode is 8.5 cm, which is based on the expert's professional evaluation. Very scientific.

This mode can effectively prevent children from extending the head or any part of the body out of the window, thus effectively ensuring the safety of children and preventing children from falling into the building; the maximum opening limit of windows in safe mode is 15.5 cm. The figures are based on relevant data from the public security organs.

This mode can be used for a good anti-theft function; in the open mode, the U-shaped safety ring should be removed, so that the window can be switched at will.

Mr. Hong finally stressed: "We only do products with conscience, and hope that through this security lock, we can end the tragedy of children falling from the building. This is our most sincere wish."

is made of heavy weight food grade aluminum with wire-reinforced beaded rim & Tapered shape. Aluminum baking tray is great for daily home use or commercial use for bakeries, cafeterias and coffee shops. Aluminum sheet pans have various sizes such as half size, full size and other custom sizes. It can be coated with PTFE and make the surface to be non stick baking tool. Solid and perforated type can be available. 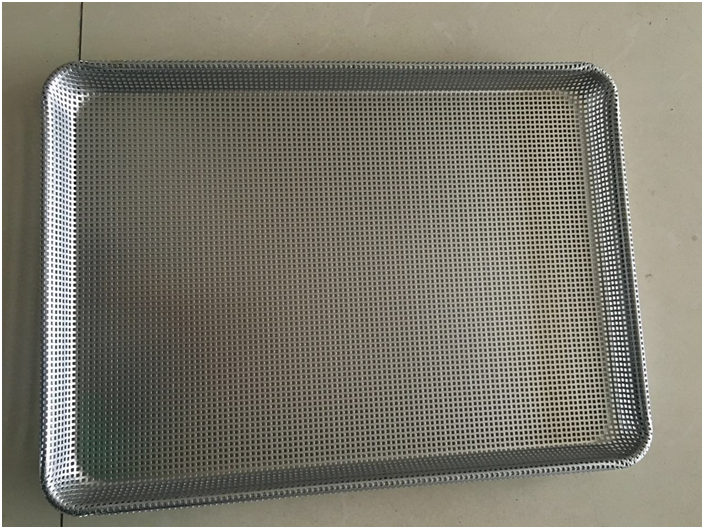