What is the charm of Xiâ€™anâ€™s ninth â€œnational central cityâ€?

December 24, 2020
In the past two days, a big news has been on the hot list. On February 7, the National Development and Reform Commission issued the Notice on Printing and Distributing the Development Plan of the Guanzhong Plain Urban Agglomeration (Development and Reform Plan [2018] No. 220), and also published the full text of the â€œGuanzhong Plain Urban Agglomeration Development Planâ€. One of the things that is particularly striking in the article is that this plan clearly puts forward the â€œBuilding a National Center City in Xi'anâ€. This means that Xi'an will formally rank among the â€œnational central citiesâ€ and become the ninth city to receive this status. 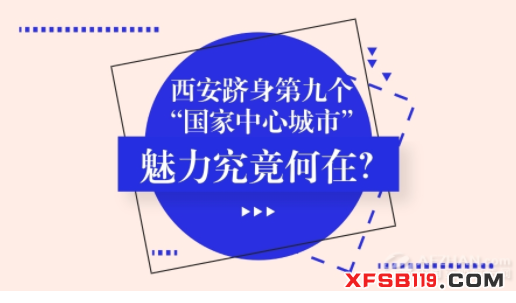 What is the charm of the ninth â€œnational central cityâ€?
The national central city is the town level at the highest position of the urban system proposed in the National Urban System Plan prepared by the Ministry of Housing and Urban-Rural Development of the People's Republic of China. National central cities have cities that lead, radiate, and distribute functions throughout the country. This function is manifested in politics, economy, culture, and foreign exchanges. The five major characteristics that a national central city must have: 1. The state organizes economic activities and the center of resource allocation; 2. The national integrated transportation and information network hub; 3. The national science, education, culture, and innovation center; 4. International influence and competition. 5. The â€œTower Cityâ€ with the strongest comprehensive strength in the national urban system.
What is the charm of this city in Xi'an? In the cities in the northwest, why is the ninth â€œnational central cityâ€ finally â€œflowering downâ€ Xiâ€™an?
Historical capital revitalizes the Northwest
Historically, Guanzhong Plain is an important birthplace of the Chinese nation. Xi'an is an ancient historical place in China's geographical, political, economic, and cultural maps. However, as the coastal areas become the frontier of open development, as a traditional inland Xi'an in the center began to experience painful â€œdecentralizationâ€, which seriously weakened the centripetal force and cohesiveness of the northwest region and aggravated regional imbalances and inconsistencies in northwest and southeast China. The national central city is essentially a national â€œcentral placeâ€, which plays an important role in agglomerating and regulating the resources of the whole country. This time, the state has made important decisions to support the construction of a national central city in Xiâ€™an, which has an important â€œfilling the short boardâ€ meaning. It is a good example of the strategic intent of setting up a national central city.
"Western Gravity" shows that the development of smart cities is accelerating
In addition to the above-mentioned "hardware", the "Western Gravity" of wisdom Xi'an should not be underestimated. As early as 2013, the Ministry of Science and Technology and the National Standardization Administration Committee listed 20 cities in Xi'an, Nanjing and Chengdu as pilot cities for national smart cities. After several years, the construction of smart cities in Xi'an has achieved initial success.
With the acceleration of the process of Xi'an in Xi'an, Xi'an has signed contracts with Hikvision, Inspur Group, Alibaba, Tencent and other companies . From smart transportation to smart government, to smart hospitals and smart logistics, Xi'an's smart city construction is in full swing. Advance.
With the deep cooperation between Xi'an and Alibaba, Box Horse Fresh, "Urban Traffic Brain", "City Water Brain", "Industry Poverty Alleviation", "Network Silk Road", "Rookie Smart Logistics Base" and "Alibaba Innovation Center" have come to Xi'an. Xi'an's urban construction will be more beautiful, transportation will be more convenient, and the city will become more intelligent. Open up a variety of information islands, make full use of information and communication technology, integrate key information of the city's core operating system, and build a mobile smart city.
On January 30, 2018, the Xi'an Municipal Government held a symposium and project signing ceremony with Tencent. The two sides signed an all-round strategic cooperation agreement, which will focus on open and shared new smart city construction, cooperation in mobile payment, cloud computing, Internet + public services, technology-enabled tourism, and space creation, and jointly promote the Internet + people community. The deep integration of Internet + business management will enhance the level of information construction of public relations services in Xi'an and seize the opportunities for the development of the "Internet +" era.
September 21, 2017, the Xi'an Public Security Bureau Traffic Management Bureau signed a strategic cooperation agreement with Hikvision, to further enhance Xi'an "smart traffic control" building, Xi'an traffic management service to a new level. The cooperation between the two "artificial intelligence" technology to video surveillance, the use of the power of "big data" to improve efficiency as much as possible, help Xi'an Public Security Bureau to carry out the city's effort to project a networked video surveillance applications in public safety building, the massive video Intelligent information, information application and investigation and detection, decision-making command, public security control, social management innovation integration,
It will help Xi'an to achieve the goal of â€œfocusing on the best in the west, building a public security army, struggling to catch up with and surpassing and creating a safe cityâ€.
Traffic congestion is almost a problem that every city has to face. With the opening of the â€œurban traffic brainâ€ in Xi'an, this problem is expected to be improved or even resolved. In January 2018, Xi'an Industrial and Commercial Committee specially organized the Municipal Transportation Bureau and the Municipal Public Security Bureau to hold the â€œUrban Traffic Brainâ€ project promotion meeting, introducing artificial intelligence technology into Xi'an urban governance, and realizing Xi'an municipal government data. , the integration of people's livelihood data and social Internet data. Government affairs data includes daily city management, etc. The people's livelihood includes operational data such as public transportation, subway, and rental. Through the integration of these data, the traffic as a breakthrough to integrate the city's traffic data resources, thereby improving or solving the traffic congestion problem in Xi'an city.
Conclusion: From this point of view, Xi'an has become the ninth national central city, which is both expected and deserved.