From the early user wars to the data battle, the smell of gunpowder between the two giants of shared bicycles has only increased. Even the investors of both sides launched a "tear" war in the circle of friends. Recently, the two have focused on the NB-IoT "Internet of Things Smart Lock" field, both sides claim that they are the first NB-IoT.

The event originated on June 20th. The media reported thato has fully applied the NB-IoT "Internet of Things Smart Lock" to the small yellow car, and said that this is the first commercial use of NB-IoT IoT technology in mobile scenarios.

However, Mobbah immediately announced that it had established a long-term cooperation mechanism with third parties in May this year to jointly build the NB-IoT Industrial Park. Therefore, Mobai should be the first in this field. 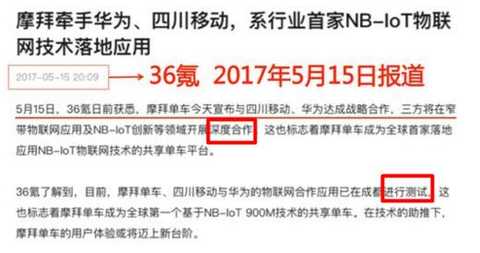 In fact, if it is not difficult to find out in detail, this is just a word game played by Mobai. We can see that Mobai declared that his first time is cooperation and testing time, not really commercial production time. In the usual sense, we take the time when the product is actually available as the only assessment time, because both R&D and testing have the possibility of failure. Therefore, the Mobike bicycle test and cooperation time, and even the factory time to express their first, there is indeed a big demeanor.

What exactly is NB-IoT? Let the two shared bike giants of ofo and Mobai compete for the first time.

Sharing bicycle competition has so far attributed the glue point to how to improve the user experience, which is beneficial to the industry and users. Judging from the information given by theo, the NB-IoT IoT Smart Lock has three advantages: â€œwider coverage, more links to devices, and lower power consumptionâ€. Compared with the current mechanical locks and smart locks, the IoT smart lock can adapt to more severe use environments such as weak and unstable network signals, enabling shared bicycles to benefit more users. At the same time, due to the improved battery power supply system, the safety problems caused by repeated charging and discharging of the battery are avoided.

Not so much, the competition for sharing bicycle NB-IoT is a war of user experience upgrade. Now, this war has made ofo take the lead. And Moby is so eager to compete with ofo for the first time, probably not wanting to be in the car lock field that has always been proud, and is beyond Beyond.