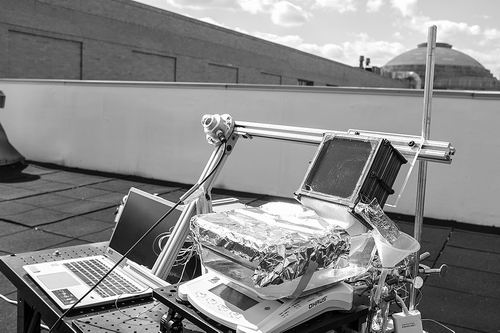 The system is being tested at MIT.

Take 3,000 scoops of seawater and turn it into a light scoop, which can solve the global water shortage.

The ocean area accounts for 71% of the earth's surface, but the area of â€‹â€‹fresh water available for human consumption only accounts for 2.5%. The newly released "World Water Development Report" by the United Nations points out that more than a quarter of the population still lives in areas where water resources are scarce.

Seawater desalination technology is considered to be one of the ways to alleviate the shortage of fresh water, effectively solving the "thirst" problem in deserts, islands and developed coastal areas. However, many technologies require complete infrastructure support, centralized installation and a large amount of energy supply, all of which have become important factors restricting their wide application.

Recently, the ITEWA (Energy-Air-Water) innovation team composed of Professor Wang Ruzhu and Associate Professor Xu Zhenyuan of the Institute of Refrigeration and Cryogenic Engineering of Shanghai Jiaotong University cooperated with the Massachusetts Institute of Technology (MIT) team to design a local heating multilevel solar Distillation technology has achieved a record of 385% of solar evaporation efficiency and a yield of 5.78 / L (m2 Â· h), which is about two times higher than the previous efficiency record, providing a new idea for achieving ultra-efficient passive solar seawater desalination And theoretical framework. Related research papers have been published in the journal Energy and Environmental Science.

The fully passive solar desalination is considered to be one of the effective technologies to solve the desalination adaptability of seawater.

"Passive solar distillers generate steam by solar heating and collect fresh water by condensation. It has the advantages of simple and reliable operation and wide application range. It is especially important for remote areas and areas with backward infrastructure." The first author of the paper, Shanghai Jiaotong University Machinery and Power Xu Zhenyuan, an associate professor at the School of Engineering, told the China Science Journal.

In passive solar seawater desalination, the most common system is single-stage disk solar distillation, whose theoretical efficiency is about 60%, but the actual operating efficiency is only about 35%. Low efficiency also leads to high water production cost and large area requirement of the system, which severely limits its widespread use.

However, when Xu Zhenyuan and team members consulted the literature, they found that the "interface evaporation" mentioned in the literature was not very efficient when it was actually applied to the seawater desalination experiment. They analyzed that the reason was that the heat of condensation was not utilized.

When a gas condenses into a liquid, the heat released is called the heat of condensation. In the traditional interface solar steam condensation process, its steam enthalpy is released into the environment.

Generally speaking, the overall heat and mass transfer is to use the heat lost in the seawater condensation process of each stage as the heat source to drive the next stage of the distillation process, so that each stage makes full use of the heat released in the previous stage.

So, how is it technically achieved? The researchers suspect that if the combination of solar interface evaporation and multi-stage condensation heat recovery is combined, it will definitely be effective. But how to realize the effective combination of the two in a small system device is a difficult problem.

After repeated discussions and improved experiments, the researchers finally designed a locally heated multi-stage solar distillation system. The first layer of equipment converts the absorbed solar energy into heat energy efficiently, and is used for seawater evaporation. The water vapor generated in the evaporation process is condensed into fresh water on the condensation sheet. In the subsequent multi-stage device, the heat released by the condensation process of the previous stage is transferred to the next stage as a heat source to drive the distillation process and obtain fresh water. The heat energy (condensation heat) generated by the final stage of condensation will be discharged into the seawater.

Different from the traditional condensing device system, this multi-stage solar distillation installation can prevent the heat of the absorption layer from leaking out through radiation, convection and heat conduction, while ensuring the seawater because of the addition of aerogel and liquid absorption core on both sides of the solar absorption layer Continuous evaporation.

"This new method is significant." Ravi Prashill, deputy director of the Lawrence Berkeley National Laboratory and a professor of mechanical engineering at the University of California, Berkeley, said that one of the challenges facing solar water desalination is due to the condensation process. The loss of a lot of energy leads to low efficiency of seawater desalination. By effectively collecting the heat of condensation, the overall efficiency of solar steam can be greatly improved.

"Since the structure improves the system efficiency in the 'solar-steam conversion' and 'steam-water conversion' links, and the two improve the system performance in a multiplicative relationship, the overall efficiency of solar seawater desalination can be significantly improved." Xu Zhenyuan Say.

It is worth mentioning that the model shows that increasing the number of stages is always effective for the improvement of the overall efficiency, but the effect quickly decays as the number of stages increases. The researchers comprehensively considered various factors such as high efficiency, pollution resistance, economy and portability. Finally, the local heating multi-stage solar distillation system was designed as a 10-stage system with an evaporation-condensation distance of 5 mm.

The researchers hope that people in coastal areas that lack infrastructure construction or power grid supply, and where fresh water resources are scarce, can also enjoy the benefits of desalination technology.

Xu Zhenyuan's vision is, "As long as there is solar energy and seawater, it can be used anytime, anywhere."

To this end, the local heating multi-stage solar distillation system demonstration device is designed with portability and miniaturization in mind, and is built from readily available inexpensive materials, including glass covers, aluminum sheets, paper towels, and nylon frames. For example, the use of paper towels as capillary porous evaporators has low cost and rich cellulose and fiber microporous structures.

"In the past, other passive solar desalination systems, solar absorbers and water-absorbing devices are independent components, and their materials are both professional and expensive." Wang Ruzhu said that in this system, light and heat conversion, insulation and capillary water supply The realization of layered functions reduces the requirement for multi-performance coupling of the evaporator while achieving efficient solar evaporation, improves the flexibility of material selection, and reduces costs.

"The device we designed is suitable for various materials and can be further optimized according to actual conditions and conditions." Wang Ruzhu told reporters.

According to predictions, the local heating type multi-stage solar distillation system can increase the efficiency of passive solar seawater desalination to 700% or 800%.

However, in Xu Zhenyuan's view, while pursuing higher efficiency, how to achieve long-term stable operation is the bottleneck that pushes this achievement to practical use. Among them, salt formation and scaling are important factors that affect the long-term stability of the evaporator in seawater desalination. "Exploring a new design that combines efficient solar evaporation and long-term salt prevention is also in our research plan." He said. (â–  Han Yangmei, a trainee reporter of this newspaper)